Washington Asks Moscow: Please Do Not to Bomb American Troops Operating on the Ground in Northern Syria

Washington Asks Moscow: Please Do Not to Bomb American Troops Operating on the Ground in Northern Syria

Washington has requested Moscow not to bomb areas of Northern Syria where US Special Forces are being deployed. These areas are under the jurisdiction of  so-called “moderate opposition” rebels who are supported by the US and its allies.
The areas in question pertain to pockets of Northern Syria in which various US-NATO supported jihadist groups including the Islamic State (ISIS) and Al Nusrah are fighting Syrian government forces (SAA) and their allies.  These terrorist pockets are protected by the US-led coalition and Turkey:
The Pentagon has asked Russia to stay away from parts of northern Syria where US special operations troops are training local fighters [i.e. terrorists including the Islamic State ] to combat the Islamic State group [the opposition rebels are allies of ISIS, ISIS is supported by the US and has special forces within its ranks], military officials said Thursday. The acknowledgement is significant because the Pentagon has repeatedly stressed it is not cooperating with Moscow as the two powers lead separate air campaigns in war-ravaged Syria…. (Al Monitor, AFP Report, February 18 2016)
The advisory acknowledges US military presence inside Syria. Washington confirms that US Special Forces and CIA are operating within the ranks of the “Moderate Opposition”.

Washington’s objective is twofold. First, “officially” it wants to avoid direct military confrontation with Russia as well prevent US casualties.  That’s the substance of the official  advisory. It is not the main objective.
Second: it is using the pretext of avoiding military confrontation with Russia (and US casualties) as a means to restraining Russia’s bombing campaign: Washington’s main objective is to protect remaining US sponsored terrorist positions in Northern Syria including those of the ISIS from Russian airstrikes.

The advisory is tantamount to asking Russia not to bomb the “moderate terrorists” who are supported by US forces. In fact this was the initial position adopted by Washington at the outset of the Russian bombing campaign against the Islamic State in late September 2015.  The Obama administration blamed Vladimir Putin of “deliberately targeting  US backed forces” in Syria (i.e. moderate terrorists) rather than US Special Forces.
Washington’s concern (from a strategic standpoint) is to protect the terrorists’ positions  rather than their own forces.
In fact, what was at stake in mid October 2015 was that Russia was killing the “good guys” namely “CIA trained rebels” whom Moscow had “mistakenly” categorized as terrorists.
According to a US official in an interview with Fox News:

“Putin is deliberately targeting our forces. Our guys are fighting for their lives.” 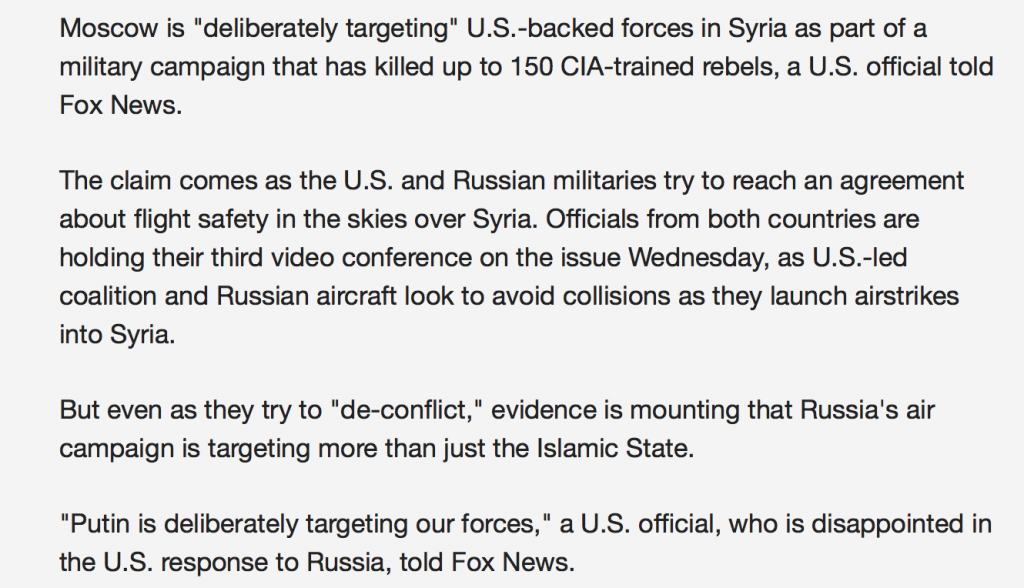 Officially, America now has “boots on the ground” operating within the ranks of  various Al Qaeda affiliated “opposition” groups as well as within the ISIS in violation of Syrian sovereignty.
The special forces are in permanent liaison with US-NATO.
The Pentagon advisory requests Russia not to target US Special Forces in “broad areas” of Northern Syria, which is tantamount to restraining Russia airstrikes against the terrorists supported by the US-led coalition:

Lieutenant General Charles Brown, who commands the US air forces in the Middle East, said US officials had asked Moscow to avoid “broad areas” in northern Syria [still under control of the terrorists] “to maintain a level of safety for our forces that are on the ground.”
Pentagon press secretary Peter Cook said Russia had honored the request, and stressed the Pentagon only provided broad geographic descriptions of where the US troops are, not their precise location.
[The Russian military knows where US forces are operating, i.e. in the ranks of various "opposition"  groups fighting government forces]
The Pentagon last year said it was sending about 50 special operations forces to work with anti-IS fighters in Syria though officials have said next to nothing about their whereabouts and progress since.
[The number of US forces on the ground is larger, these Pentagon figures do not include mercenary forces hired by private contractors operating within terrorist ranks]
The United States has since August 2014 led an international coalition against the IS group in Iraq and Syria. [This is a lie; amply documented the US and its allies including Turkey and Saudi Arabia are protecting the Islamic State]
Russia entered the Syria conflict in September, when it began bombing rebels opposed to President Bashar al-Assad. Russia says it is attacking the IS group and other “terrorists.”
… The Pentagon has held a series of “deconfliction” talks with Russian counterparts to outline procedures in case of a mishap (Al Monitor, AFP Report, emphasis added)

It is worth noting that in mid-January in response to Russia’s airstrikes and the defeat of the US-NATO sponsored terrorist opposition forces, the Pentagon announced a new plan to train up to 7,000 new rebels inside Syria “as part of an effort to secure Turkey’s southern border”. This plan coordinated with Turkey would consist in creating a so-called safe-zone in Northern Syria. (WSJ, January 15, 2016 ).
According to a Secret Pentagon document, the ultimate objective “was” to create an Islamic State Caliphate (Salafist Principality) in Northern Syria.