Tripoli, a Tense and Listless City With Gunmen and a Well-Stocked Boss Outlet

Tripoli, a Tense and Listless City With Gunmen and a Well-Stocked Boss Outlet

TRIPOLI, Libya — Cracking open the giant church door, the Nigerian watchman cast a wary eye over the deserted street.
It was Sunday morning in Tripoli’s old city, but only a trickle of worshipers was expected at the 19th-century Anglican church, which towered over the curling alleyways. The congregation is made up mostly of African migrants, said Oke, the watchman. But now they stay away, fearing arrest by the predatory militias that prowl the streets of the capital.
So the migrants lie low, waiting for the calm seas of summer and the chance of a boat to Europe. Oke is waiting, too — headed to London, he said, insisting somewhat improbably that he intended to apply for a visa.
“I’ll make it this year,” he said. “Or maybe next. I hope.”

Everyone seems to be waiting for something in Tripoli, a tense and listless city caught in the maw of Libya’s strange war. As conflict rages elsewhere in the country — in the ravaged eastern city of Benghazi, or Surt, where the Islamic State exerts its brutal grip — a precarious order holds in the capital. Smugglers lurk in the port; migrants lie in wait; heavily armed militias and squabbling politicians, nominally allied, quietly vie for control.
For all that, Tripoli has a veneer of calm and sophistication, even prosperity, that is at odds with the image of a war-torn nation.
A smooth, six-lane highway swoops across its suburbs. Rush-hour traffic is ferocious because of lavish subsidies that make fuel cheaper than bottled water. (A sedan’s tank can be filled for about $2.)
In a cobblestone plaza, under an Ottoman clock tower, men lounge in the sun with the paraphernalia of cafe culture: croissants, cellphones, cigarettes and paper cups of nus-nus, a silky coffee drink with a dash of milk and cream. In the best shopping areas, near the old Italian buildings, there are gyms and pizza parlors and gleaming outlets for European fashion brands. Not many war zones can boast Benetton or Marks & Spencer or, as Tripoli does, a well-stocked Boss outlet.
After nightfall, on the seafront, children play soccer under the palm trees while their fathers puff on water pipes and hunch over small glowing boxes — portable Wi-Fi hot spots — that offer an Internet fix.
Up close, though, the picture becomes more troubling. The snazzy stores are largely empty because few can afford to shop there. Libya’s petro-wealth, which underwrote Col. Muammar el-Qaddafi’s eccentric 42-year rule, is sputtering dry: Oil production has slumped, the currency is crashing, and the Central Bank’s cash reserves are running perilously low.
Security is brittle. The smartly uniformed men who loiter at busy traffic junctions belong to Tripoli’s myriad militias: Islamists, fighters from the nearby city of Misurata or just neighborhood gunmen. Robbery, kidnapping and human rights abuses are rife; random bursts of gunfire erupt in neighborhoods at night. A wedding? Or gunfight? Nobody seems sure, and nobody wants to ask.

Odd things happen. One night, a senior government official agreed to meet in a hotel lobby. But when I turned up, with a colleague, he admonished us loudly with theatrical flair. “I never agreed to meet you!” he protested in the lobby.
Only 20 minutes earlier, the man had given us directions to the hotel over the phone. His outburst had the air of a performance, perhaps for the benefit of someone else. We left quietly.
Then again, Westerners are rare: Even the die-hards of any trouble spot — the United Nations, embassies and aid agencies — evacuated to Tunisia almost two years ago. The handful of foreigners who remain are viewed as spies by suspicious Libyans, or as bait for the city’s many hostage-takers.
“It’s become like America, a land of opportunity — for kidnappers,” said Mohanned el Mahjoub, a chatty 30-year-old militia commander, as we sped through Tripoli one night in his hulking four-wheel-drive Jeep.
He had a friendly yet nervy air, chain-smoking and rattling off his thoughts; the amber streetlights illuminated his scarred face. The Jeep halted at a check post on the southern city limits — a concrete hut on the edge of a field — where Mr. Mahjoub pulled up a plastic chair and explained why he had brokered a local cease-fire with a rival group.
“Once we sat down with them,” he said, “we realized we were fighting for the same thing.”
Other Libyans also have to remind themselves why they are quarreling. At first glance, their war is a maddening stew of towns, tribes and armed groups driven by as many motivations: money, oil, religion and the manipulations of countries, like Egypt and Turkey, that support rival sides. At its core, though, the conflict often seems to boil down to human factors: personality, grudges and greed. As it drags on, some are questioning its cost.

Mr. Mahjoub pointed to the glass right eye that replaced the real one he lost to a mortar shell splinter in the fight to oust Colonel Qaddafi in 2011. Before the revolution, he dreamed of becoming a commercial airline pilot and made plans to move to Canada. “I never made it,” he said with a wry smile.
Billions of dollars in half-finished construction projects ribbon the city skyline: concrete skeletons of hotels, shopping malls and apartment blocks, swaddled in scaffolding and motionless cranes. Work on most stopped in 2011, including a golden mosque commissioned by Colonel Qaddafi’s second wife, Safia, who lives in exile in Oman.
Even less remains of Colonel Qaddafi himself. His Bab al-Aziziya compound has been bulldozed into a giant rubbish dump. The only sight of his visage is on a satellite television station funded by his exiled supporters. But the central question raised by his ouster looms more urgently than ever.
Can a country long unified by oil wealth now find a better reason to stay together?
Time is running out to find an answer. The country’s cash reserves, the glittering prize for Libya’s many warring factions, are being sucked dry by a thriving black market. Fishermen have converted their trawlers into covert tankers that smuggle cheap Libyan fuel to Tunisia and Malta, causing the price of fish to soar. Cheap Libyan flour can be found as far afield as Mali. And under the arches of the old souk, beside the gold jewelers and cloth merchants, men in sneakers and sunglasses trade bricks of cash — hundreds of thousands of dollars and euros — as the public face of the flourishing currency market, a source of elaborate scams and fabulous wealth.

A Libyan banker, who agreed to meet for brunch in a cafe overlooking the sea, explained: Well-connected businessmen and militia commanders buy dollars from the Libyan Central Bank at the official rate, either with credit cards used to withdraw the money in Turkey (over 500,000 such cards have been issued, he said) or through fake import schemes in which empty tankers have pulled into port. Returning to Libya, they sell the dollars back onto the black market, tripling their money.
“Easy money,” the banker said, “and it’s made a handful of people very, very rich.”
Of late, the gears of war have been shifting in Libya, and few believe that Tripoli’s delicate status quo can hold. Gen. Khalifa Hifter, a brash figure in the east, recently seized a large part of Benghazi. In Washington, London and Paris, Western leaders are mulling a concerted military drive against the Islamic State.
And in a few months, migrant boats will again put out to sea, plying their desperate trade across the Mediterranean. For Oke, the church watchman, it may be a moment of truth: to pray for the migrants, or join them on their perilous voyage? 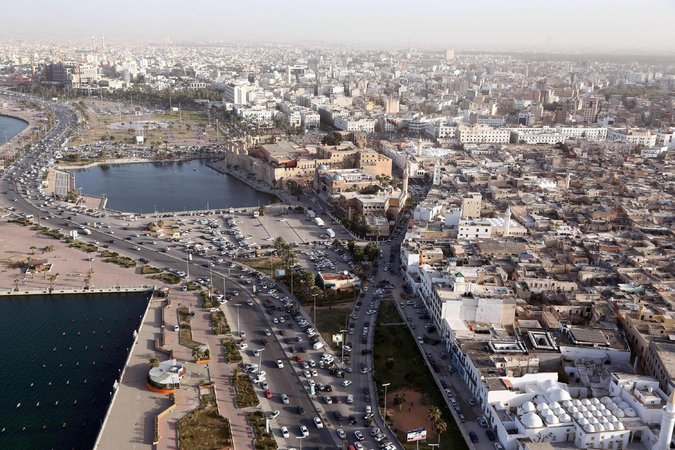