The Libyans who lead a United Nations-backed unity government traveled by sea early Wednesday to Libya’s capital, Tripoli, as part of a bold if risky effort to break the country’s two-year political stalemate.
Prime Minister Fayez Serraj and six other members of the presidency council, which is supposed to pave the way for a new government, arrived from Tunisia by boat at a naval base in central Tripoli. The landing defied an air blockade led by rival groups that had restricted the city’s airspace over the weekend. The blockade also drew strong criticism from the United States.
Eager to establish his authority, Mr. Serraj told a hastily convened news conference that he would broker a cease-fire among Libya’s myriad factions and confront the Islamic State, which has expanded aggressively along a coastal stretch of the country in the past year.
But hours later, an eruption of heavy gunfire in central Tripoli signaled that some groups opposed his arrival, and raised the prospect of a fresh wave of violence in the capital.
Khalifa al-Ghwail, the prime minister of Tripoli’s unrecognized government, called on his supporters to stand against the “infiltrators.”
“We won’t leave the capital until the revolution is protected,” he said.
The unity government, known formally as the Government of National Accord, was created from a political agreement negotiated under United Nations auspices, signed by Libyan leaders in Morocco in December. It is one of three rival governments vying for control of Libya, but enjoys support from the United States, Britain, Italy and France.
The Western allies see the United Nations-led process as the best option for stabilizing Libya, which has been in turmoil since the ouster of Col. Muammar el-Qaddafi in 2011, and for mounting a united military drive to push back the Islamic State, also known as ISIS or ISIL.
In recent months the United States and others have exerted quiet but intense pressure on the United Nations and the unity government, which was based at hotels in Tunisia and Morocco, to establish its legitimacy by moving into Tripoli.
Despite the dramatic images of a sea landing, even staunch supporters admit the unity government’s chances of success are uncertain and depend largely on the reaction of armed groups, whose allegiance remains unclear.
“It’s going to be a tense couple of days,” said Wolfram Lacher, a Libya expert at the German Institute for International and Security Affairs in Berlin. “There are quite a few risks associated with this endeavor, and it’s hard to know how it will play out.” 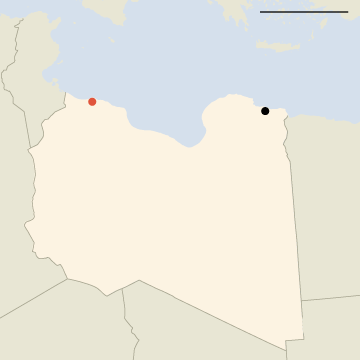 
By The New York Times
The voyage began under cover of darkness, as Mr. Serraj and the six others from the nine-member presidency council boarded a boat in the Tunisian port of Sfax. After transferring to smaller boats in the Mediterranean, they landed at the Tripoli naval base about 2 p.m.
In separate statements, Secretary of State John Kerry and Foreign Secretary Philip Hammond of Britain welcomed the unity government’s move and urged Libyans to support it. The United Nations special representative for Libya, Martin Kobler, urged opposing groups to facilitate an “immediate, orderly and peaceful handover of power.”
In practice, though, Mr. Serraj’s group at the naval base is under the protection of naval officers and gunmen loyal to allied militia leaders — a mix of Islamists and groups from the nearby city of Misurata.
Arrayed against them are the capital’s self-declared government and allied militias that have bitterly opposed the United Nations-led peace process. Intermittent antiaircraft fire at the city airport over the weekend, which prevented some flights from arriving, was seen as a warning against any attempt by Mr. Serraj and his group to arrive in the city.
A State Department spokesman, John Kirby, assailed that gunfire on Tuesday as the work of a “small group of political obstructionists” intent on subverting the political process. “The people of Libya deserve better than this sort of ham-fisted obstructionism,” he said.
Western officials, hoping the new government can take root, have been planning a new Libya International Assistance Mission, led by Italy, to help stabilize the country and to help train its armed forces. But such hopes rest on a fragile foundation.
As Mr. Serraj posed for photographs at the naval base, residents said the city was seized with apprehension about how rival militias would respond to his arrival. Even supporters quietly admitted that if his endeavor goes wrong, it could plunge the capital into violence.
The unity government’s first challenge will be to leave the naval base and establish control of key government ministries across Tripoli.
“There are big questions about how the other side will react,” said Mr. Lacher, the analyst. “I don’t think they want confrontation, but if that happens it will be terrible for the unity government.”
Diplomats and United Nations officials said they believed that a majority of the city’s militias supported the new administration, but acknowledged that alliances were constantly shifting. It is also unclear whether the third rival government, based in the eastern city of Tobruk, will yield to the unity government’s authority.
Money is likely to play a role in back-room negotiations. The unity government has been in talks with the Libyan Central Bank, which controls the country’s foreign reserves, estimated at about $85 billion.
It hopes that by controlling the country’s purse strings, it can persuade recalcitrant militia leaders in Tripoli to accept, or at least not attack, the unity government.