The US Helped Overthrow Libya 2011. Here’s What’s Happening There Now

The US Helped Overthrow Libya 2011. Here’s What’s Happening There Now

We are helpless and not being able to do anything against this deliberate destruction to the oil installations. NOC urges all faithful and honorable people of this homeland to hurry to rescue what is left from our resources before it is too late.”
That’s from Libya’s National Oil Corp and as you might have guessed, it references the seizure of state oil assets by Islamic State, whose influence in the country has grown over the past year amid the power vacuum the West created by engineering the demise of Moammar Qaddafi. The latest attacks occurred in Es Sider, a large oil port that’s been closed for at least a year.
Seven guards were killed on Monday in suicide bombings while two more lost their lives on Tuesday as ISIS attacked checkpoints some 20 miles from the port. “Es Sider and Ras Lanuf, Libya’s biggest oil ports, have been closed since December 2014,” Reuters notes. “They are located between the city of Sirte, which is controlled by Islamic State, and the eastern city of Benghazi.”
ISIS also set fire to oil tanks holding hundreds of thousands of barrels of crude. “Four tanks in Es Sider caught fire on Tuesday, and a fifth one in Ras Lanuf the day before,” Ali al-Hassi, a spokesman for the the Petroleum Facilities Guard told Bloomberg over the phone.
Ludovico Carlino, senior analyst at IHS Country Risk says the attacks are “likely diversionary operations” during Islamic State’s takeover of the town of Bin Jawad, a seizure that may enable the group to expand and connect “its controlled territory around Sirte to the ‘oil crescent.’”
Islamic State is pushing east from Sirte in an effort to seize control of the country’s oil infrastructure, much as the group has done in Syria and Iraq. As Middle East Eye wrote last summer, “the desert region to the south of the oil ports has been strategically cleared in a series of attacks by IS militants on security personnel and oil fields, where employees have been killed and kidnapped, and vehicles and equipment seized.”
“I expect they will try and take Sidra and Ras Lanuf and the oil fields on the west side of the oil crescent,” one oil worker said. “There are few people left to protect the oil fields apart from local security from isolated towns.” 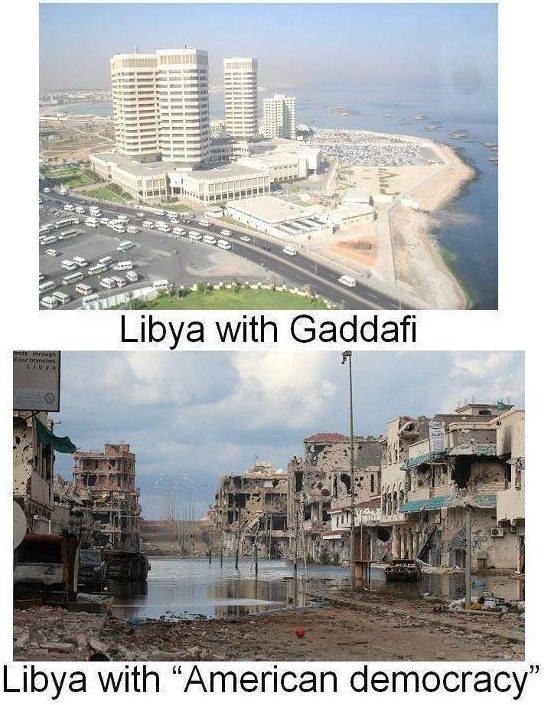 Efforts to protect Libya’s oil are complicated immeasurably by the fractious (and that’s putting it nicely) political environment.
In short: the country is a modern day Wild West and a strong central government is now a distant memory. This makes administering the country’s resources nearly impossible. Oil production is now just a quarter of what it was under Qaddafi. Essentially, both of Libya’s two governments have what they call a National Oil Corp. The eastern NOC is run by the exiled government in Tobruk (which is internationally recognized), where the House of Representatives was exiled in 2014 after elections produced an outcome that wasn’t agreeable to Islamist elements in Tripoli.
Unfortunately, large foreign oil companies won’t work with Tobruk’s NOC which sets up the following ridiculous scenario: the internationally recognized government in Tobruk has an NOC no one wants to work with, while Tripoli’s NOC (which foreign oil companies will do business with) is run by a government that the world doesn’t deem legitimate.
To top it all off, there’s every reason to believe that neither Tobruk nor Tripoli actually control the country’s oil. Here’s Foreign Policy:
“On the ground, the conflict involves far more than just the two bickering governments. Libya is composed of dozens of tribes, each with its own shifting interests and allegiances. ‘There’s a question about the extent to which the political forces actually have control over the important militias on the ground,’ said Chivvis. ‘I think all this comes down to who controls the oil; it comes down to alliances on the ground. Which political forces control which sites within Libya.’

Ibrahim Jadhran is a perfect — and crucial — example. The 35-year-old was a militia leader during the 2011 revolution, and was appointed commander of the Petroleum Defense Guards by the still-unified transitional government in 2012. Originally from the eastern city of Ajdabiya, the rogue militia leader is an outspoken advocate of a federal system for Libya and frequently uses his power to open or close oil ports, shutting off oil exports — and therefore salaries — when he disagrees with either government.
‘One of the initial causes for the plummeting of Libyan oil production was the blockade imposed by Ibrahim Jadhran in August of 2013,’ said Porter. The commander has continued the tactic of stoppages in defiance of both regimes, even trying to steal a tanker full of crude to sell on the black market. The ship was finally stopped by the U.S. Navy off the coast of Cyprus.
Jadhran’s power is not to be underestimated. In fact, according to local media reports, it was actually him, and not the Tobruk government, that closed the Zuetina port. As Porter points out, it is Jadhran — not Tripoli or Tobruk — who truly controls exports.”
Got that? There are two governments and two NOCs, but that doesn’t really matter because the whole show is run by a militia leader. “Jadhran is a mystery even to us. We have not yet understood what he really is, apart from an oil thief,” Misrata Military Council head Ibrahim Beitemal told Middle East Eye last year.
Ali al-Hassi (quoted above) is a spokesperson for Jadhran’s forces.
Islamic State then, is apparently at war with Jadhran which is interesting for a number of reasons.
First, Jadhran’s brother is in ISIS. “ISIS’ Libya branch released an online statement earlier in the week claiming to have taken control of the coastal city of Bin Jawed, about 120 miles east of Sirte,” CBS reported on Monday. “Bin Jawed is the last city before the oil town of Sidra and the huge oil port of Ras Lanouf, both currently witnessing fierce clashes between ISIS and al-Jadhran’s men.” And more: “ISIS fighters were reportedly attacking Siddra from three directions,aided by al-Jadhran’s own brother, who apparently joined the ISIS camp.”

Additionally, some say Jadhran once tried to broker a deal with the group and it’s not entirely clear what, if any, relationship he has with the militants. “We have been told that Jadhran proposed some reinforcements to ISIS but on the condition that he kept control of the oil ports and fields, but this was rejected,” a source told Middle East Eye.
So Libya’s vast oil wealth is effectively up for grabs and the person guarding it has a brother who not only joined ISIS, but is actually participating in the battle for key ports and facilities. Now, Britain is apparently on the verge of sending in thousands of troops to halt the ISIS advance in yet another example of the West engineering regime change only to go back in later in a futile attempt to clean up the mess. “Crack SAS troops are in Libya preparing for the arrival of around 1,000 British infantrymen to be sent against ISIS there in early 2016,” The Mirror reports. “The operation will involve around 6,000 American and European soldiers and marines – led by Italian forces and supported mainly by Britain and France.”
Of course that wouldn’t be necessary if the West hadn’t thrown out the government in Tripoli back in 2011. Now, the stepped up ISIS attacks threaten to derail the formation of a unitary governing body.
“In December, representatives of Libya’s two rival powers signed a United Nations-brokered power-sharing pact that called for the formation of a national unity government by mid-January,” WSJ notes, adding that the violence could“undermine the financial viability of a peace agreement by destroying the country’s main source of revenue.”
“I urge the swift formation of a national unity government and the establishment of a unified force structure capable of bringing peace to this country and protecting its natural resources,” Mustafa Sanallah, chairman of National Oil Co., said, in a statement posted on the company’s website on Wednesday.
Now that Russia has begun to dismantle Islamic State’s oil operation in Syria and now that the link with the Turks has been revealed, it might very well be that ISIS is turning to Libya as an alternative source of financing. Taking control of the country’s oil crescent would be a good start.
Will the country’s rival governments unite in time to stop the assault? Will Jadhran resort to some manner of negotiated settlement with ISIS if it means retaining his influence over Libya’s oil riches? How will ISIS get its captured crude to market without a cross-border state sponsor?
All good questions that will be answered soon enough. For now, we close with one final quote from Jadhran’s spokesperson:
“Pray for us.”
ـــــــ-ــــــ-ـــــ-ـــــ-ــــــ-ـــــــ-ـــــ-ــــ-ــــــ-ــــــ-ـــــــ-ـــــــ-ـــــــ-