The government has come under attack over its role in tackling the growing humanitarian crisis in Libya after figures were released showing that the Department for International Development has earmarked just £50,000 in aid for this financial year, despite international calls for an urgent response, to avoid food and medicine stocks running out.
A UN source in the region said there was disappointment at the “paltry bone-throwing from a European country whose bombers reaped so much destruction in Libya just five years ago”. 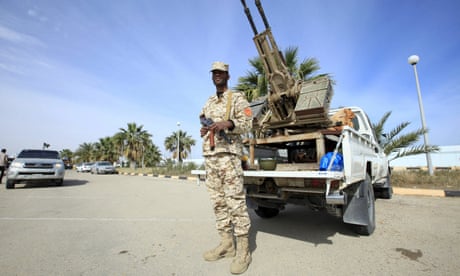 SNP MP Stephen Gethins, a member of the foreign affairs select committee, said: “The government’s intention to spend just £50,000 [for an adviser] on humanitarian aid following their bombing campaign of £320m is unbelievable. UK policy has been nothing short of disastrous in Libya. Not only did the government undertake military action with little in the way of long-term planning, but it saw the UK spend 13 times more bombing the country than in reconstruction efforts in the four years after that, with the people of the country paying a heavy price.
“David Cameron has been widely condemned for helping create yet another failed state,” he added. “A disaster is unfolding in Libya, not least due to the UK’s actions. The UK must now step up and provide adequate humanitarian assistance to a country which desperately needs it.”
President Barack Obama said last month that Libya had been allowed to become a “shit show” and a base for Islamic State. He singled out Cameron for taking his “eye off the ball”, and said that following the military intervention to aid rebels during the 2011 Arab spring, Libya was forgotten, despite its position on Europe’s doorstep.
Efraim Halevy, a former Israeli intelligence chief, said Libya was Cameron’s “biggest mistake” and was about to be the “biggest problem for Europe in the months to come”.
Downing Street confirmed that the prime minister had not yet responded to last month’s letter from the foreign affairs select committee chairman, Tory MP Crispin Blunt, asking him to come before the Libya inquiry. The committee is waiting to complete its report after a fact-finding mission to the region, but its members are known to be anxious over the reports of planned ground troops.
The prime minister has previously responded to concerns over reports that troops would be sent out by saying he would tell MPs only if it is happening “in a conventional sense”. British special forces are widely believed to be operating in the country.

“If we had any plans to send conventional forces for training in Libya, then of course we’d come to this House and discuss them,” Cameron told the Commons last month. Sources say that Italian and British embassies in the region have been briefed on plans for a 6,000-strong, Italian-led force, which would include 1,000 British soldiers.
Martin Kobler, the UN special envoy to Libya, told the security council last month: “The situation in Libya has deteriorated further, against the background of poor funding for the humanitarian response.”
Libya has a population of six million and significant resources, but an estimated 2.4 million Libyans are in need of humanitarian aid, with almost half of the country’s health facilities not functioning. “It is now imperative that Libyan political actors take responsibility in the higher interest of the Libyan people to stop human suffering,” said Kobler, adding that the process towards a democratic transition remains precarious.
A DfID spokesman said that last year the UK gave the International Red Cross £2m towards its work in Libya. “We also provided £1.9m to organisations including the International Organisation for Migration and the United Nations High Commission for refugees for the response to the Mediterranean migration crisis to provide humanitarian relief and protection of vulnerable populations.
“Lastly, we continue to fund a £50,000 secondment to the Office for the Coordination of Humanitarian Affairs to support the coordination of humanitarian assistance. We are keeping the humanitarian situation in Libya under review.”